x
Get In Touch

Quality vs. Quantity: The Hidden Shadows Of Social Media

Why Being Remote Works For Us
05 May 2021
The Absolute Way: Transforming Our Company Culture
12 May 2021
By Ben Austin
May 05, 2021 Leave a comment
in Uncategorized 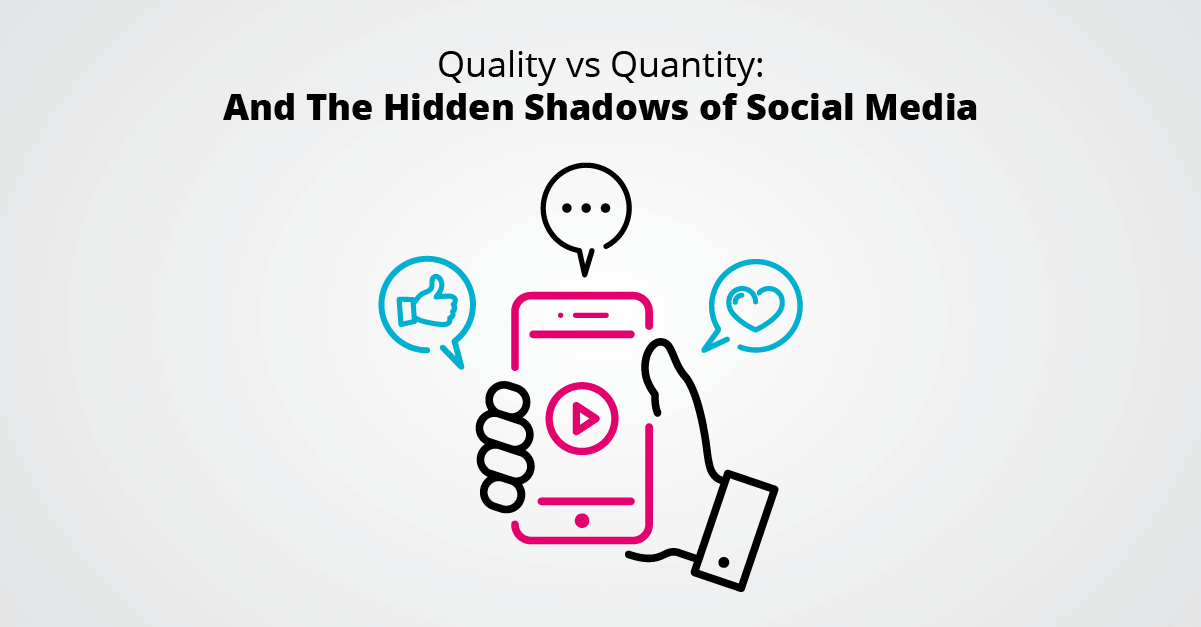 Social Media has always had an engaging, energetic side that we’ve been allowed an unlimited and uncontested visibility too. Away from that, however, there’s a side of social media that isn’t seen or spoken about. A side that despite the changing algorithms is always kind of kept in the shadows.

Today, I’m taking the opportunity to explore some of these fairly unspoken about topics; from influencers buying followers, to the increasingly relevant quality vs. quantity social media debate.

Focus On Quality Over Quantity

Constantly changing algorithms have shifted the way many of us get noticed on social media. Whilst quantity has always been important in maintaining a high exposure, competition is increasing every day, meaning that the quantity of posts you share just won’t cut it anymore. When it comes to sharing our lives, our professions, our interests, we need to find new ways to stand out. The quality of what we are posting has a growing importance over the quantity of which you’re doing it. Favouring quality over quantity when posting on social media, whilst maybe lowering exposure initially, will grow the overall reputation of your business exponentially and ensure that your business is sustainable long-term.

It can be difficult to come to terms with the new normal, when so many of us were familiar with the old trend of pumping out as much content as possible, but in this era of Social Media marketing, one of the best pieces of advice is to spend more time creating less content. A post with higher engagement will often be favoured more by the algorithm than three posts with lower engagement, not to mention it goes a long way in creating a much more refined brand image. Getting the right balance can be nearly impossible, but through insights and analytics, experimentation in the real world is the only way to really see what works.

Every platform has a constantly changing algorithm. For example, Instagram are still going through a transition from their old 2016 chronological feed to a newly updated ranked feed which takes time and, as such, there’s a whole set of constantly evolving differences. Instagram prioritizes the best posts, so keep your focuses on image quality, pushing the relevant ones to each user to the top of the page for maximum visibility leaving the other content left to be pushed down. This highlights the need to post quality content, as Instagram continue to put a focus on previous interaction as a means of recommending future content into consumers feeds.

Twitter’s old chronological algorithm, in which posts were shown on feeds at the times they were posted, is long gone. Like Instagram, it’s evolving pretty much constantly and a focus on quality posting is increasing. Twitter looks at two major things when you tweet; it’s recency and the level of engagement such as retweets and likes that are far more likely to push you up the rankings. Twitter does however also looks at you, the user. So many social media platforms are shifting their algorithms so that less active users perform worse.

With the growth of social media, the idea of a celebrity has also shifted; according to the UK’s Advertising Standards Agency (ASA), anyone with over 30,000 Instagram followers is considered a “celebrity”. So, it’s no surprise that we have seen such a growth in the number of social media users, namely influencers, who are now buying fake followers. They believe this level of ‘celebrity-hood’ is now easily attainable which, to be honest, is. A recent Hootsuite Webinar highlighted that the problem for businesses with fake followers is knowing what influencers to recruit when promoting their products. An influencer with a visual following of 10,000 followers could very easily have half of those comprised of fake followers, and so the actual reach would almost half in this example. This is making it increasingly difficult for businesses to market themselves and is one of the key reasons why alongside marketing on Social Media, the integration of other marketing campaigns will always be important, especially when it comes to business.

Get Your Social Media Profile Off The Ground

Speak To Our Experts

There is a certain randomness when gaining widespread popularity on social media. If you look at recent platforms such as Tik-Tok, we find it common for users to have a “few seconds” – weeks – of fame before they go back to living their normal lives. So, what is it that gives someone that stroke of luck on social media? Great content? Hashtags? The Real truth is that other than the algorithm, no one really knows. Two identical people could both post the same exact piece of content on the same platform at the same time and their engagement levels would be different. Sometimes, just like life itself, it’s about that piece of content being in the right place at the exact right time, hitting the algorithm in the sweetest spot and spreading like wildfire; and before you know it you’re a global superstar for all of two weeks.

Social Media has always been about experimentation because there is no universal, textbook guide for every business. The algorithm is always changing and so it is important to update your strategies whilst continuing to post quality over quantity. It’s important to talk about the more unspoken sides of social media so that we can stay ahead of trends like fake followers that throw in fake analytics and negatively alternate insights.

For more information, get in touch with a member of the expert team at Absolute Digital Media on 0800 088 6000, today.